Wendy is a Memphis native and a Member of the firm.  Prior to joining Shuttleworth, Wendy practiced as both as a solo practitioner for many years and as a partner in other local law firms.

During her career, Wendy has managed a multi-jurisdictional creditor bankruptcy and foreclosure practice. Directing teams of associate attorneys, contract attorneys in various localities, paralegals and support staff has prepared her for the challenges of representing her clients throughout the states in the southeast region.

In addition to her busy practice, Wendy is involved in various local bar associations and community groups.  Wendy is involved in the local bankruptcy bar and is a member of the Bank Lawyer’s Committee and Credit Conference Committee of the Tennessee Banker’s Association.   Wendy currently serves on the Board of Directors for the Risk Management Association (Memphis Chapter) and on various committees with the Rotary Club of Memphis East.  Wendy has served on the Grants Committee for the Women’s Foundation of Greater Memphis in recent years.

Jane Kaufman Jones is a native of East Tennessee where she grew up in a rural farming area. She has worked in the legal system her entire working career beginning as a legal secretary. She later decided to attend law school and has been a practicing attorney since 2008.

Ms. Jones is also a Rule 31 Mediator in Civil and Family Law and trained in mediating Domestic Violence cases.

Congratulations to Shuttleworth PLLC’s own Frank S. Cantrell on being named winner of Memphis Business Journal’s Best of the Bar for the Private Firm – Medium category.

We are pleased to announce that we are now Shuttleworth PLLC.

Along with our new name, our Memphis office has a new address. 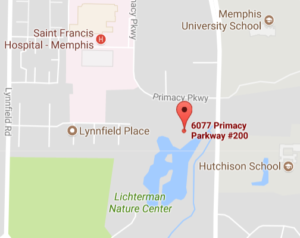 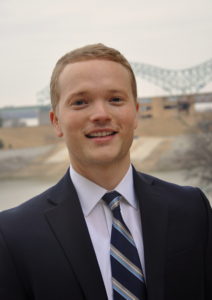 While attending law school, Alex served as President of the Student Bar Association and received the Dean’s Award for Distinguished Service to the law school.  He was a Staff Member of the University of Memphis Law Review and received the Law Review Award for Excellence in Legal Writing for Best Memorandum, the Dean’s Award for Excellence in Legal Methods I, and the CALI Award for highest grade in Litigation Drafting.  During his second and third years, Alex was awarded a Cecil C. Humphreys Law Fellowship and served as Research Assistant to Professor Lynda Wray Black and Dean Emeritus and Professor of Law Kevin Smith.  As a 3L he was selected to be a Pupil in the Leo Bearman, Sr. American Inn of Court.

Prior to joining the firm, Alex participated in the Los Angeles Dodgers Accelerator Program as a legal consultant for sports and technology startups.  Alex is a member of the Tennessee Bar Association, the Memphis Bar Association Young Lawyers Division, and the Sports Lawyers Association. 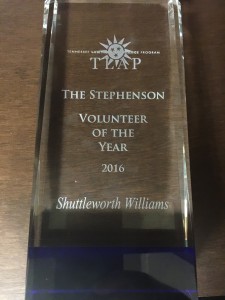 Shuttleworth PLLC recently received the 2016 “Stephenson Todd Volunteer of the Year” Award from the Tennessee Lawyers Assistance Program at this year’s Camp TLAP retreat.  For the first time in TLAP’s history, the “Stephenson” was given to a group of people rather than to an individual.

The attorneys and staff of Shuttleworth PLLC were recognized for their long-standing support of TLAP, a confidential assistance program providing consultation, referral, intervention, and crisis counseling for lawyers, judges, bar applicants and law students who are struggling with substance abuse, stress or emotional health issues.  Ken Shuttleworth accepted the award on behalf of the firm.

Shuttleworth PLLC attorney Lane Wolfenbarger recently obtained a judgment for one of the firm’s banking and financial law clients.  In that matter, a post-foreclosure collection case in the Circuit Court of Grainger County, Mr. Wolfenbarger was able to show that a borrower had defaulted on its obligations in which the bank had a valid security interest.

The Court not only awarded a judgment in the client’s favor in the amount of $59,701.45, but also granted the client possession of and the right to sell any and all property covered by and/or subject to all UCC Financing Statements the parties had previously executed.

The Court of Appeals further found that while the defendant might be responsible for a myriad of conditions throughout its business, the plaintiffs could not establish that any of those conditions caused the fall without identifying the object responsible, and that without any additional evidence concerning the identity of the object, the trial court did not err in granting the motion for summary judgment under Tenn. Code Ann. § 20-16-101 because the evidence was insufficient to establish the causation element of plaintiff’s claim. 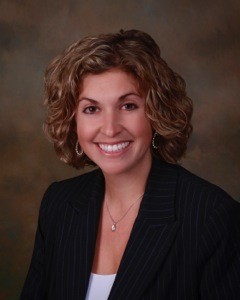 Shellie has previously worked as an Associate Attorney with the Law Office of John Cobb Rochford; an Unemployment Appeals Hearing Officer for the Tennessee Department of Labor Appeals Tribunal; a Research Assistant to the Honorable Alberto Gonzales; and as an intern for the Nashville Predators, the Volunteer Lawyers and Professionals for the Arts, the Everhart Law Firm, and the Law Offices of George B. Handelsman.

Shellie is licensed to practice law in Tennessee, Pennsylvania, and the United States District Court for the Middle District of Tennessee.

In her spare time, Shellie plays softball on several teams (including the Nashville Bar Association’s Lawyers’ League); sings in the Vox Grata choir; and spends time with her golden retriever, Dakota. 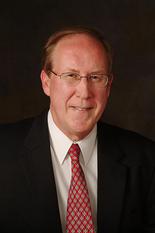 The IOLTA (Interest On Lawyers’ Trust Accounts) program was established by the Tennessee Supreme Court in 1984, and the responsibility for its administration was assigned to the Tennessee Bar Foundation. The purpose of the program is to raise funds to be distributed, in the form of grants, to organizations in Tennessee that provide direct legal services to the indigent and to organizations that seek to improve the administration of justice. IOLTA has granted over $20,390,060 to providers of these services in the state.

TDLA selects one of its members to serve on the Tennessee Bar Foundation’s Grant Review Committee, which assesses the merits of those various grant applications for awards. The Committee members are assigned individual responsibility for investigating and vetting up to three applications. Each Member reports to the full Committee at its annual meeting each November. The Committee then recommends awards to the Foundation’s Board of Trustees for final decision.

For 2015, the Committee proposed awards totaling $465,825 to providers of direct legal services such as The Legal Aid Society of Middle Tennessee and the Cumberlands and Memphis Area Legal Services. In addition, grants were made totaling much less to organizations that seek to improve the administration of justice, such as domestic violence prevention organizations and Tennessee CASA Association. The TBF Board of Trustees adopted the committee’s recommendations as proposed.

We resume our work in October, vetting applications for calendar year 2016. This process is time well spent working with top lawyers and judges from across the state. I appreciate the opportunity to serve TDLA in this role.